I started this post the day after Hurricane Sandy brushed past, but had forgotten about it. Perhaps it will be of interest even though it’s a bit out of date.

Here are a few pieces of information I had my hands on over the past couple of days as Sandy went by. I have a weather station and had my eyes glued to it as the storm came through.

Some weather station plots for the days prior to and just after the storm:

You can see very clearly when the storm came through by the various plots – deep “valley” in barometric pressure (new record low for my station – 961.59mB) and a peak in rain rate and wind speed. Curiously, there wasn’t a wind speed record set – it may be that we were on the “good” side of the storm, or it may be that my anemometer was malfunctioning – I replaced it a few days later.

I use Lightsoft Weather Center (LWC) software; unfortunately the developer got very ill and no longer supports the software. It still works fairly well, but I may need to replace it as it ages.

I don’t know much about GRIBs, and my area of interest in weather data is usually much smaller  than their resolution provides, but with the size of Sandy it really shows a good overview of the forecast conditions.

And below is some history for comparison: a few scans of old weatherfax sheets from a ship I was aboard in the mid-1990s in Alaskan waters. We frequently had strong non-tropical storms. Sandy’s lowest pressure was 943 mB; the lowest I recorded during Sandy was 961.59 mB. 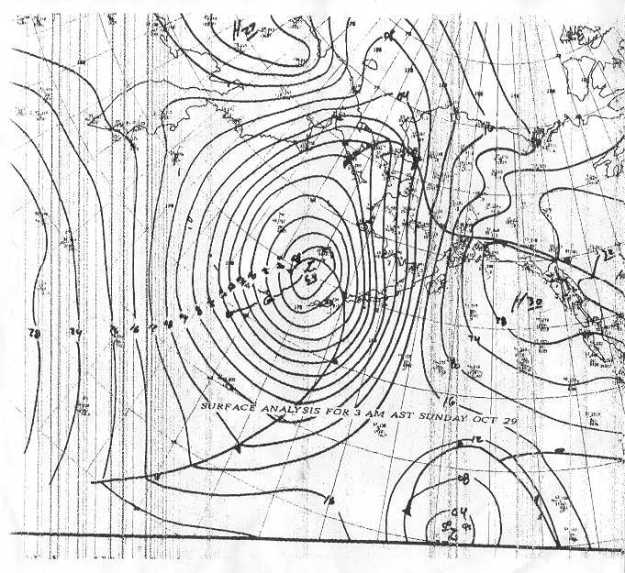 This may have been the one where we holed up in Lost Harbor, Akun Island near Akutan Harbor and anchored in a sheltered bay where we saw sustained 80-knot winds. These storms are very different than hurricanes – “cold core” vs “warm core” and tend to come through in “trains” across the North Pacific.